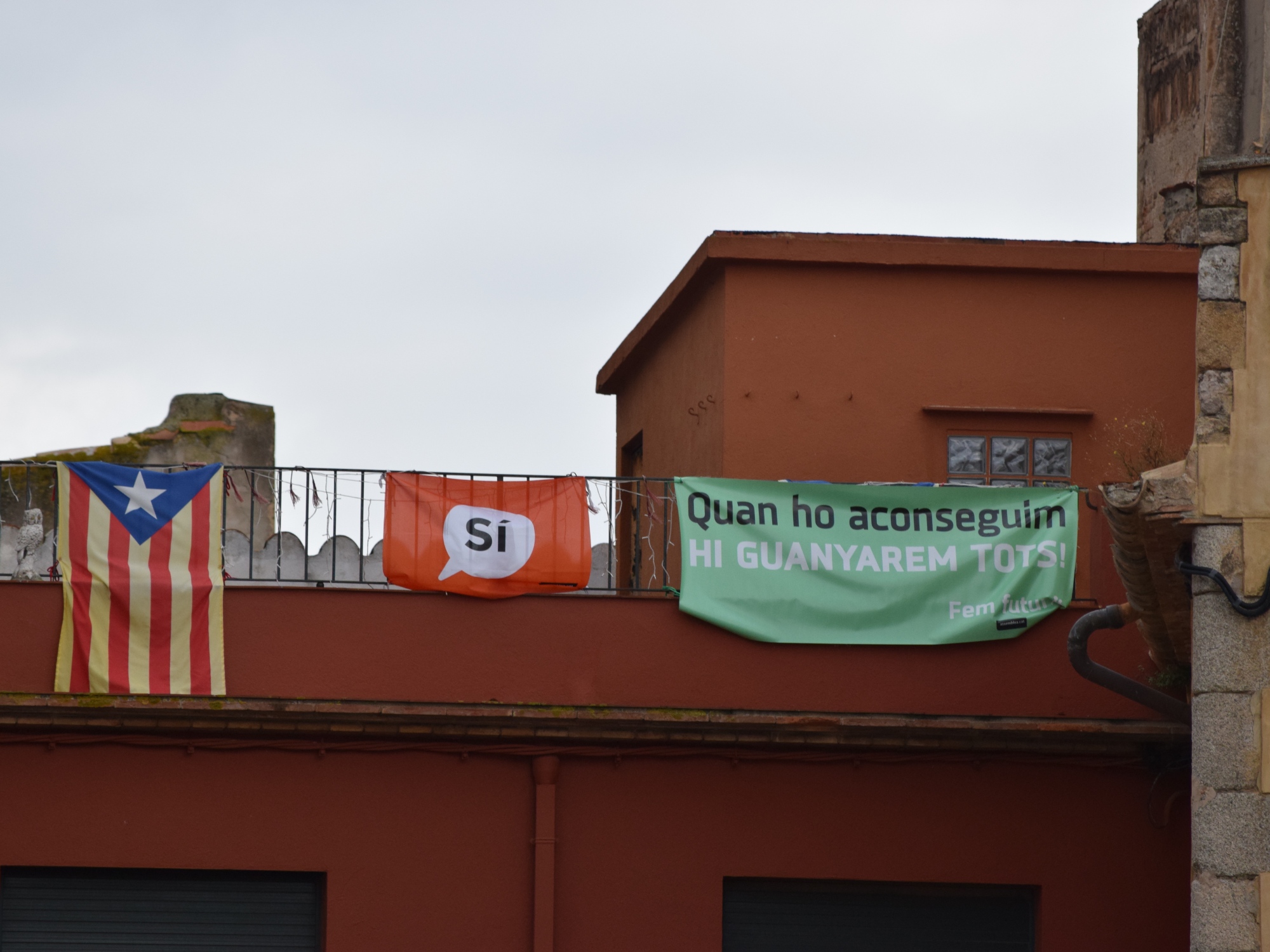 Every Sunday morning the operation begins, like clockwork, at 5am. Trucks idling, tents being constructed, crates being unloaded; the rumbles, clangs and scrapes blur into a sonic streetscape in the dark. Something begins to materialize and as the sun rises the sounds are joined by the colors and smells of a huge open-air market. Sunday are big days in Palafrugell, Gerona province, Catalonia, Spain. The daily produce, meat and seafood booths expand in content and booths selling every imaginable ware join the daily vendors. The displays of clothing, home goods, beauty products, jewelry, electronics are punctuated by colorful posters containing only one word, “Sí”, as if encouraging you to make a purchase. A churro truck sits at the top of the hill delighting children and adults. People start to trickle in as soon as the market opens at 8am and by 11am it’s packed with locals and tourists alike. This is how Sundays begin here. 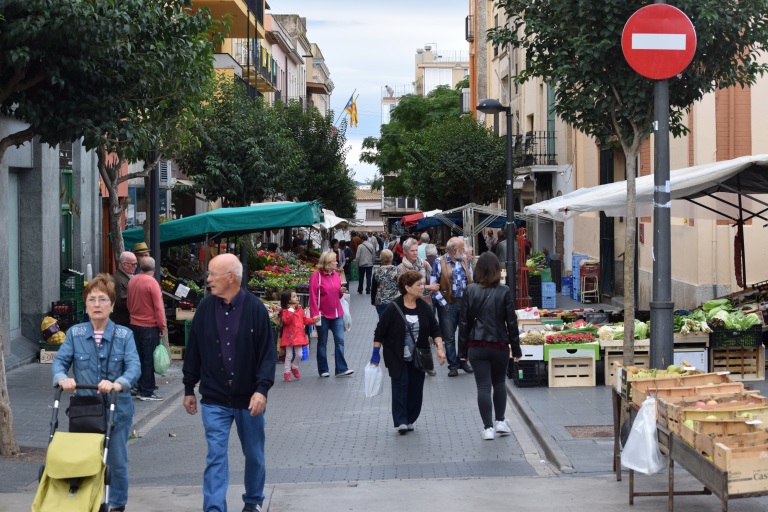 A slow day at the Sunday market

Today, however, is different. The first time I hear cheering I think I’ve imagined it. I’ve been tossing and turning all night, unable to find the right balance between hot and cold, and the sun’s barely up. The second time I awaken to the sound of voices it’s unmistakable; the sun is up, the bell tower is ringing eight o’clock, and this time the cheer is followed by a chant I can’t quite make out. Whether the barrier is el Museo del Suro muffling the crowd or the fact that I speak Castellano, not Catalán, I’m not sure-but I can nonetheless understand: today is the day.

Today is Sunday, October 1st, 2017, or 1-O (for 1 October) as it’s known here. Today Catalans vote for their independence from Spain. Despite the lack of many vendors and almost any foot traffic in the market this morning there is an energy buzzing through the town. Or maybe it’s in my head from the very strong Spanish coffee I had a second cup of this morning in anticipation of a long day. As I walk through the market I notice the empty spaces on the sidewalks, the bare counters in the indoor markets and, of course, the multi-colored posters. “Sí.” The posters are not there to encourage the tourists, but the residents. They are telling the people of Palafrugell to vote “yes” for independence. And today is the day of that vote. 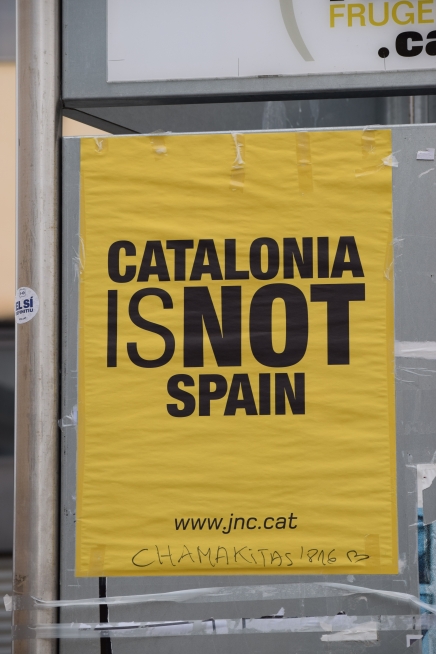 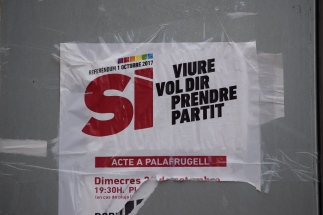 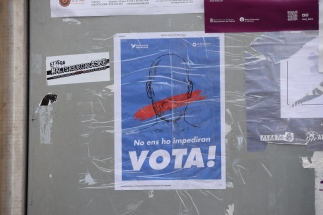 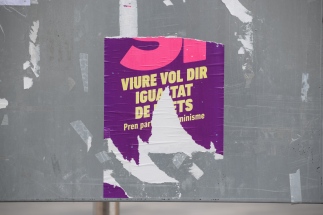 Posters near the Museo de Suro

While the usual market thoroughfare is quiet, a crowd has already gathered just off the main road at 9:30am. People slowly grow in number outside the Museo del Suro, a nearby polling location. Two police officers stand across the plaza, their presence nonthreatening but conspicuous. Yet by 11:45 foot traffic at the market has picked up, and while the Sunday (and tourist) turnout pales in comparison to the last few weeks the daily vendors are still getting plenty of customers. The bars and restaurants are crowded and the line for the theater spills out into the Plaça Nova. It looks like a typical Sunday again. By two o’clock the streets empty as families go home for lunch and tourists head to the beaches to enjoy the waning days of the Costa Brava holiday season. The crowd at the Museo del Suro polling station is smaller, waiting patiently in line for the ballot. Is Palafrugell an outlier? Does the tranquility here belie the unrest in the region? 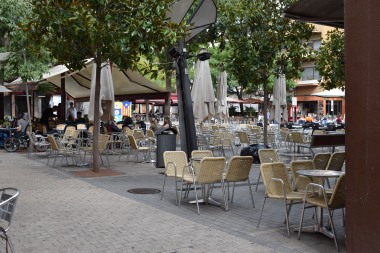 The Plaça Nova at noon and again at 3pm

Things may be peaceful here in Palafrugell but there’s a different scene in Barcelona right now. Voters, young and old, are dragged away by police: the simple act of voting in this referendum is considered illegal and Spain’s response is unequivocal. Images from social media show police in full body armor clashing with civilians. Videos and photos of crying and bloodied citizens show a region in turmoil. The referendum has pitted the province against the state and neither party is backing down. It is these images that will define today’s events in the eyes of the world: the images of the Spanish government defending the law with force: the state turning violent against its own citizens. Watching the Spanish government’s response, it’s hard not to feel sympathetic to the “Sí” cause. It’s easy to watch what’s happening via Twitter and view the people voting in Catalonia as the victims of an oppressive regime. When governing bodies clash it is the people who pay the price. 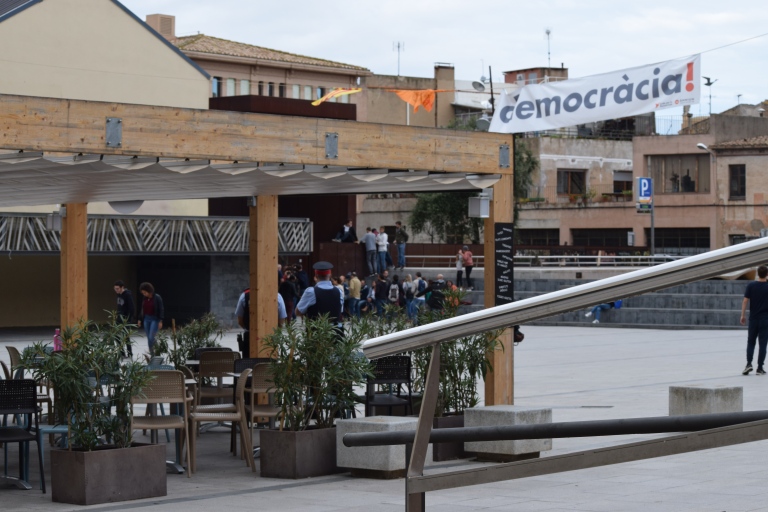 Two Mossos policemen observe the line at the polls

Despite the crowds protesting and the lines, beginning before dawn, to vote, the numbers seem to point towards the likelihood that, if every eligible voter went to the polls, the referendum would not pass. Support has declined since 2014’s symbolic referendum and many who feel there should be a referendum want it to be held legally or not at all. Parties and citizens are protesting the referendum itself by boycotting the vote. Normally, this would be met with the idea that, by not voting, one has made their choice and has sacrificed their voice. But if the vote itself is not legal, can one technically make that sacrifice? And if one does, should one expect consequences for inaction?

The Catalan government has not set out a minimum turnout to make the vote binding, instead insisting that it will be binding regardless of turnout. By abstaining in protest, will part of the population simply not have any say? Can the Catalan government impose any law on its people, as a result of a vote those people believed would never be valid? This is where Catalan President Puigdemont’s argument for democracy falters. His opposition in the Catalan parliament, of which there is a minority, are strongly opposed to the rushed nature of the legislation and many walked out of the session to pass the referendum in protest of the process. It seems clear that those voting today will be mostly those who support independence. Can an illegal, likely unconstitutional, referendum be legitimate if only a small part of the population votes? And if not, then does the actual threat of the referendum to Spain merit the response by the government? 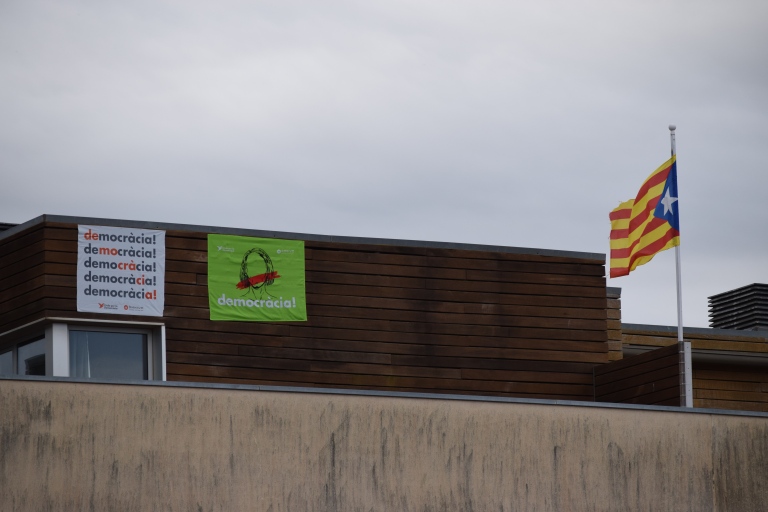 The Catalan flag flies alongside banners for “democrácia”

The legitimacy of today’s vote-no matter the outcome-will be debated for years to come, but the referendum itself and the government’s response will hover over the citizens of Spain for much longer. Tensions between Madrid and Barcelona have always existed and always will, but today introduces a new level of distrust between the two. More importantly, today’s events and the coverage they receive will shape how many view Catalonia and Spain. The Catalan government risked alienating many of their own people with the referendum; Spain’s violent response risks alienating the rest of the world.